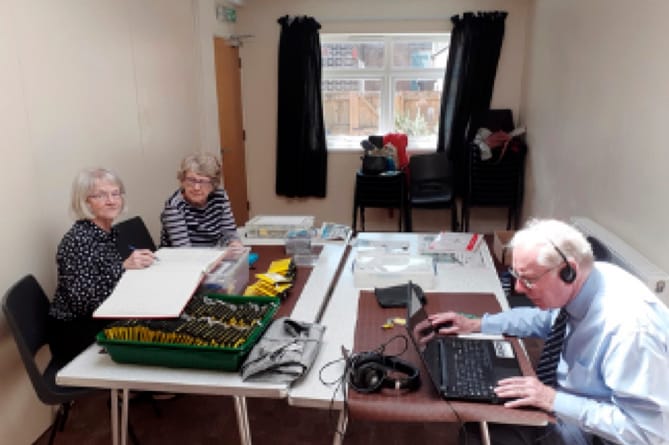 Dyrons Journal, the Teignbridge Talking Newspaper (TN) for the visually impaired, has started recording its weekly editions at The Courtenay Centre.

For several years the TN’s recording base was at The Mid-Devon Advertiser’s HQ, The Old Manor House, in Wolborough Street.

During the pandemic this space was no longer available and for more than 18 months every weekly edition was recorded in the chairman’s dining room.

It was hoped that the TN would be able to move to The Advertiser’s new premises in Courtenay Street. Unfortunately this proved to be impracticable, and the Journal had to search for a new home.

Fortunately Cllr Gordon Hook was able to put the Journal in touch with Newton Abbot CIC, which runs The Buckland Centre and The Courtenay Centre.

They were quick to offer some space at The Courtenay Centre and the Journal recorded its first edition there on May 19 (see picture).

‘Everyone at the Centre has been so helpful that the transition has been almost painless.

‘We are looking forward to working with the lovely people at the centre, as well as maintaining our excellent relationship with everyone at The Advertiser.’

The Courtenay Centre is run by Newton Abbot CIC, a local community organisation supporting people who live and work in Newton Abbot and the surrounding communities.

Peta Richards-Jones, centre manager for The Courtenay Centre and The Buckland Centre, says: ‘We are pleased to be supporting Dyrons Journal. We’re really happy to be able to provide a space for such an important community service supporting visually impaired people.

‘It’s important to us that the community centre is a valuable resource for Newton Abbot and so we are always keen to support groups such as The Dyron’s Journal and its volunteers.’