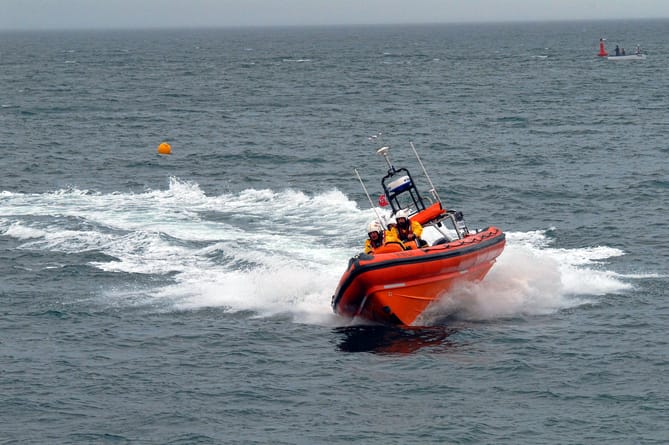 A MAN was reported to be unconscious following a ‘diving incident’ off Dawlish yesterday evening, Wednesday.

A spokesperson for Teignmouth RNLI said this morning, Thursday: ‘Volunteer crew from Teignmouth RNLI were given instruction to locate a small rib off the coast at Holcombe near Dawlish, where two persons had been free diving.

‘One of the persons on board had faced difficulties in the water and was reported to be unconscious. The volunteer life savers from Teignmouth were joined on scene by volunteers from Exmouth RNLI who were nearby on a routine exercise as part of their crew training. ‘The casualty was located quickly and taken onboard the Teignmouth B-Class lifeboat, where the volunteer crew were able to give emergency first aid.

‘The crew conveyed the casualty via boat directly to Teignmouth Lifeboat Station where they were met by awaiting paramedics from the Southwest Ambulance Service. The ambulance crew gave further medical treatment and were then able to transport the casualty via ambulance to hospital. ‘Local coastguard teams were also on scene at Teignmouth, along with the Coastguard helicopter and Air Ambulance, both of which had landed locally at The Point. ‘Following the recovery of the casualty to hospital Teignmouth RNLI were stood down, and the lifeboat was able to be recovered to the Boathouse. The volunteer shore crew then ensured the lifeboat was refuelled, cleaned and ready for its next tasking. Multiple emergency service crews attended the incident from around 6pm.

Highways ahead on carbon neutrality

No lie-in for rescue team after Queen's medal event

An Air Ambulance spokesperson added: ‘Our Exeter based aircraft was tasked to an incident in Teignmouth at 6.13pm where an adult male was reported to be suffering a medical emergency after diving.

‘The patient was subsequently taken to Torbay Hospital by a land ambulance, with our crew member on board to treat and monitor the patient along the journey.’

Coastguard and Devon air ambulance helicopters were reported hovering over the beach, and Teignmouth, Exmouth and Torbay lifeboats were sent.