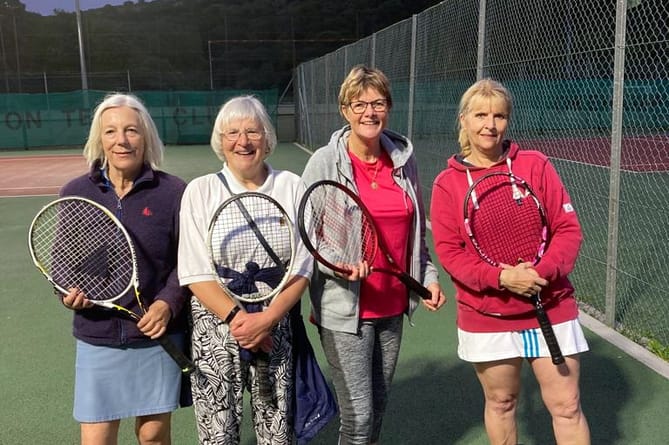 Newton Abbot Tennis Club’s Mixed Team book-ended a busy and successful week for the club with wins on Monday evening and again on Sunday morning.

The only constant player was Mark Ayliffe as other players were rotated to widen opportunity.

Ayliffe paired up with Nell Clotworthy in the 7-1 win at Totnes and then partnered Susie Gunning in the 6-2 win over visiting Churston at the end of the week.

The other pairing at Totnes consisted of Kate Hooper and Andy Lloyd, while the Sunday quartet was completed by Matt Doye, who played alongside the club’s coach Madeline Ramsey

Katya’s on the silk road from Ukraine to gymnastics glory

These two wins, plus the opening 7-1 win at Kingsbridge, keep Newton’s Mixed team at the top of the the South Devon League.

On Wednesday evening Clotworthy and Hooper resumed their successful partnership, only dropping three games across their four sets in helping the Ladies’ A team to an 8-0 win over Exeter Golf & Country B at the Recreational Ground courts.

Support came from Gunning and Barbara Robillard via 6-4, 6-4 and 6-2, 6-0 scorelines. This result keeps the Newton Ladies team out in front of the Exeter District Division Two.

The club fielded two other teams on the Monday evening, the Men’s B and the Ladies’ B. The former remain unbeaten and at the top of Division Eight of the Exeter & District League following their closely fought 6-4 outcome over visiting Exwick B. Matt Davey and Dave Spencer shared their opening rubber 4-6, 7-5 but grabbed an extra point by winning the tie-break before winning their second rubber 6-2, 6-3 for a four-point haul.

Mark Laughton and Dave Doxsey lost their opener 3-6, 5-7 but won one set plus the tie-breaker in the second to claim the other two points to edge the win.

The Ladies’ B made the long trek to Okehampton for a Division Five match in the Exeter & District League and returned home with a 5-all draw. Captain Jane Comyns alongside Jacqui Theaker drew their first rubber but won the tie-break before winning their second without dropping a game. Ali Ainscough and Tracey Milton claimed the other point by winning one of their four sets.

On Friday evening the Men’s team in Division Two of the South Devon League battled to a 5-3 win. James Brice and Gordon Hooper made a below par start and were soon 6-1 down but re-focussed to win the second set 6-4, before having a more straightforward outcome in their second rubber which they won 6-2, 6-2.

So a very successful week for the Newton Abbot Club with five wins and a draw, with 20 different players representing the club across the six matches.