E-scooter casualties on the rise in Devon 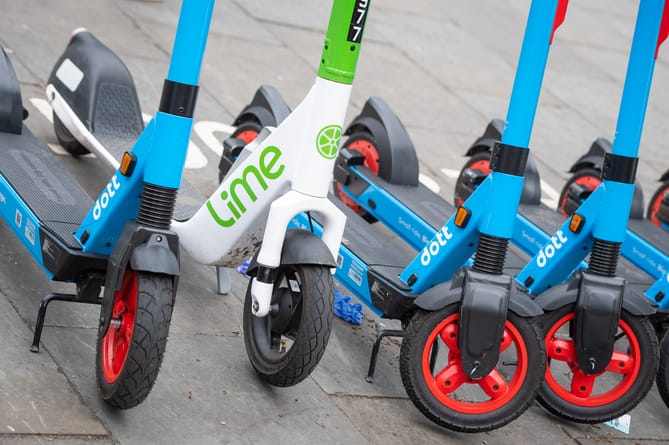 The number of injuries from e-scooters is on the rise in Devon and Cornwall, new figures show.

E-scooters have become a popular method of travel in many towns and cities across the UK.

They have the potential to reduce pollution and provide a quick and easy mode of transport for those who cannot easily walk or cycle.

But privately-owned e-scooters remain illegal on public roads, and critics say they are dangerous for riders and other road users.

Road casualties rise in Devon – but still lower than before pandemic

Fewer than 20 people convicted of rape in Devon and Cornwall last year – as more than 1,500 offences recorded

Provisional figures from the Department for Transport show there were 15 casualties from e-scooter accidents in 2021 recorded by Devon and Cornwall Police, up from four in 2020.

E-scooters are still only responsible for a small proportion of all traffic accidents, accounting for less than 1% of all road casualties in Devon and Cornwall last year.

As part of a planned Transport Bill announced earlier in May, the Government is considering legalising the use of private scooters on roads in the near future, and trials of rental scooters are already underway in 30 areas across the UK.

Users themselves were far more likely to be hurt from these collisions than other road users, accounting for 76% of all e-scooter casualties across Great Britain.

Pedestrians made up 16% and cyclists 5%, while car users only suffered 17 slight injuries from e-scooter accidents in 2021.

Lorna Stevenson, who researches e-scooters at the University of Westminster, said they could still help the UK meet its carbon targets.

“Transport emits more carbon than any other sector in the UK. E-scooters don’t contribute to air or noise pollution – the biggest potential benefits from them come if people use them instead of driving for short, solo trips.

As for why casualties might have risen, she said there are several possible reasons, including more people using e-scooters.

“Retailers have reported strong sales of e-scooters recently – as traffic levels have risen after lockdown and people return to the office, riders might be more likely to share the road with other vehicles and be travelling at peak times on peak routes,” Ms Stevenson added.

Across Great Britain, the number of casualties from e-scooter collisions stood at 1,359 for 2021, nearly triple the 484 recorded the year before.

And in 2021 there were nine fatalities, up from just one the year before.

The DfT notes that minor casualties may go unreported, so the true number of injuries may be higher.

A DfT spokesperson said: “We have set out clear regulations and guidance for users and rental providers on wearing helmets, speed limits and precautions to keep everyone safe.

“While riding a privately owned e-scooter on public land is currently illegal, we are considering how best to design future regulations.

“Our Transport Bill will enable us to take the steps we need to support innovation, robustly crack down on irresponsible use and make e-scooters safer.”