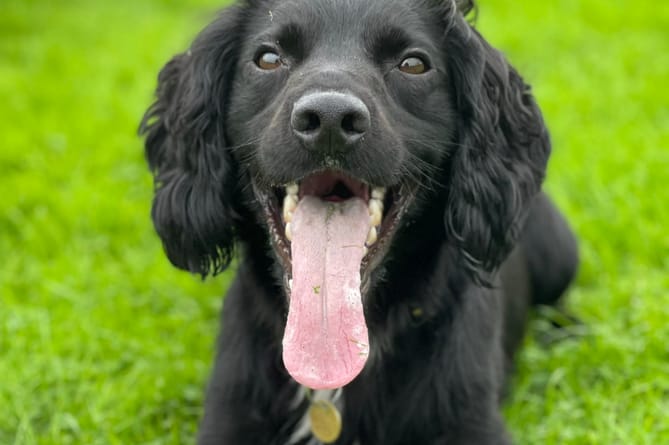 Marshall the spaniel is now thriving as a police dog after his ordeal. Picture: RSPCA (Copyright Claire Todd )

A DOG who was rescued after his owner was caught on CCTV abusing him is now working as a sniffer dog with the police.

Spaniel Marshall was spotted on CCTV cowering in fear at a supported living home in Devon while a teenager kicked him, hit him, picked him up by his neck and threw him onto a sofa.

Marshall was rescued by the RSPCA and officers launched an investigation.

This week at Newton Abbott Magistrates’ Court, Marshall’s previous owner – who pleaded guilty to causing unnecessary suffering* to the young spaniel at a court hearing in February – was sentenced.

When the Teignmouth was hit by a freak flood

On Monday, the man from Torquay, – who cannot be named due to his age at the time of the offence – was given a one-year community order with 100 hours of unpaid work and 20 RAR days. He was also disqualified from keeping all animals for 10 years and ordered to pay £400 in costs and a £95 victim surcharge.

The CCTV footage – filmed on July 4, 2021, on cameras at a council-run accommodation site in Devon – shows the man entering a lounge area where black spaniel, Marshall, cowers from him.

In her statement, presented as part of the court case, Inspector Becky Wadey, who investigated the case, said: ‘The male follows the dog across the room and stamps down hard on the dog’s body with his left foot...

‘The male then grabs hold of the dog in the neck area and picks it up and then pushes the dog down roughly onto the nearby sofa.

‘Not letting go of the dog, the male kneels over the dog in a very dominating manner with his hands still around the neck area of the dog.’

She added: ‘The male then slams the dog back down onto the sofa and appears to be holding it down by its right ear.

‘He picks the dog up again and slams it back onto the sofa twice, the dog is on its back. He holds the dog down for a couple of seconds whilst leaning over it, and then the male stands up, letting go of the dog.

‘The dog’s tail is clamped tightly down between its legs, the male walks back over and pulls the tail back and looks at the dog’s genital area.

‘He then punches the dog in the chest and then grabs the dog by its throat, lifting it high in the air, holding it there for around three seconds.

In mitigation, the court heard that the young man was remorseful about what had happened and was disgusted with his actions.

A vet who saw the video described the incident as involving ‘unprovoked gratuitous aggression and abuse’ and recommended that Marshall be removed from the man’s care.

The RSPCA requested assistance from Devon & Cornwall Police to seize the dog and take him into their care. Enquiries revealed that Marshall was still legally owned and microchipped to his previous owner and that the teenager had him on a trial basis. Marshall’s previous owner agreed to sign him over to the RSPCA for rehoming.

Speaking after the court case, Inspector Wadey said: ‘Marshall is a lovely dog but he has a lot of energy. He was fostered by a member of staff who took him running every day but they soon realised that even that wasn’t enough.

‘We felt he really needed to be working and, as a youngster, would be perfect for the police.’

Marshall was fostered by an experienced dog handler before starting his training course with Gloucestershire Constabulary in November 2021; qualifying – as a cash, drugs and firearms detection dog – in time to hit the streets at the start of 2022.

PC Rich Hunt, Gloucestershire Constabulary dog training instructor, said: ‘Marshall is brilliant; he’s a typical crazy little spaniel! He doesn’t stop and goes at 100mph in everything he does.

‘He was brilliant on the training course and he’s doing really well out on the streets.

‘Just a few weeks ago he helped officers with the search of a vehicle that had been stopped in Cheltenham and found a large quantity of Class A drugs that had been hidden in the car’s dashboard.’

Marshall was partnered with handler, PC Adey Cole, and now lives with him and his general purpose police dog, PD Dara.

Inspector Wadey added: ‘Marshall didn’t have the best start in life but I am so thrilled to see him now thriving as a police dog, loving his new life, and using his amazing enthusiasm and incredible nose for good in fighting crime and keeping our communities safe.

‘Marshall really has made the most incredible transformation from rescue pup to su-paw hero!’

Happy in his work: Police Dog Marshall at play