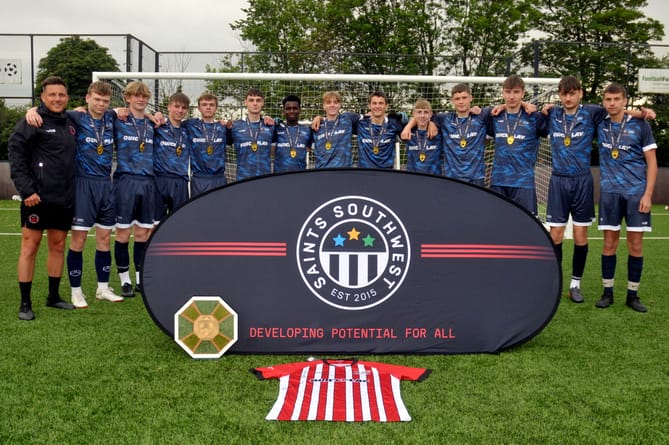 A TEAM of young footballers from South Devon have achieved national success by winning the Junior Premier League Shield.

And the Devon under-16s based at South Dartmoor College in Ashburton topped off their campaign by beating Stockport County on penalties in the final of the National Shield on May 21.

Mark Titchard, director of Saints Southwest and head coach of the U16s, explained: ‘It was a long old season and this was the cup competition. We were runners-up in the mini league which then put us through to the National Shield.

‘We had to play eight games, quarter-finals, then the best of the south in the semi-final – followed by north versus south in the final against a very strong Stockport County side.

‘It was a scrappy game, to be honest – a typical final with lots at stake. We went 1-0 down and managed to get a free-kick inside the box from a pass-back, converted that to make it 1-1 and force penalties. We missed the first penalty but ended up winning 4-3.’

All of Saints Southwest’s Devon teams came together at the final training session of the season last week to give the trophy-winning under-16s a guard of honour.

‘We’ve built the team this year on strong morals, good team ethics, sticking together, loyalty and honesty,’ Titchard added. ‘The boys have gelled really well after a tough start so we’re all really pleased.

‘We want to celebrate success and sometimes people in the South West get missed out when it comes to representing themselves on a national level.

‘I think by doing this, the lads are now role models to the younger age groups and hopefully we’ll have a lot more success like this in the future.’

Centre-back Charlie Wills, who captained the side to success, was keen to praise the coaches for the role they have played throughout the team’s development.

‘It was a brilliant experience, especially after all the years we’ve been together as a squad,’ said Wills. ‘Some of us have been here since we were six years old.

‘Lifting the trophy was a great feeling. Our coaches have been vital, too – they’ve kept the group together and helped to improve some of the players massively. To have something to show for it at the end is good.’