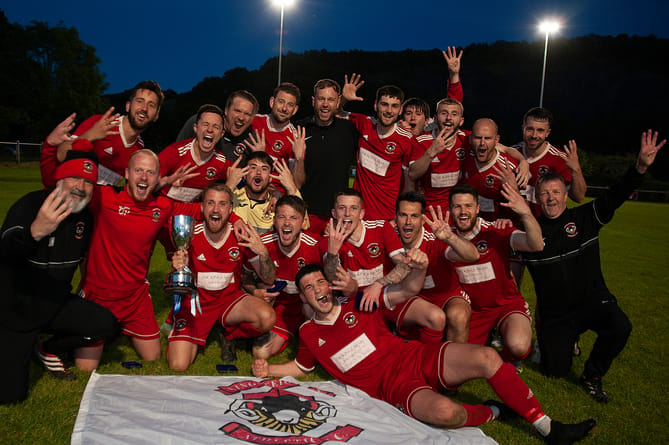 MANAGER Steve Workman could barely contain his emotions after his Kingsteignton Athletic side wrapped up a silverware quadruple last night.

Having already secured the South Devon League Division One title and the Herald Cup, the Rams weathered a slow start to beat Chudleigh Athletic 3-0 in Saturday’s Devon Senior Cup final.

That left the Dartmouth Cup as the only trophy needed to complete the full box set, which they won 4-2 after extra time at Buckfastleigh Rangers’ Duckspond ground – also against Chudleigh.

Kingsteignton were guilty of another sluggish start on Tuesday, and this time they were made to pay when Henry Buckpitt directed Gavin Hammon’s corner home in the 10th minute.

Parity was restored on the stroke of half-time when Lewis Plackett had an initial effort kept out and Mark Voisey was on hand to gobble up the rebound.

Sam Barnes completed the turnaround 10 minutes after the break when he turned smartly and curled beyond Tobias Harvey – but Chudleigh weren’t done yet and would force another half-hour.

Matt Briant’s free-kick was headed on by Buckpitt and pulled back from the byline by Joe Long – with an unmarked Matt Williams making no mistake from close range.

Extra time was 10 minutes old when Rams substitute Aaron Paget was brought down in the area, Barnes just squeezing his spot-kick past Harvey.

And with eight minutes left the engravers could get to work when Barnes completed his hat-trick with the help of a big deflection off Long. Chudleigh also finished a man short after Buckpitt saw red for a poor challenge on Barnes.

‘I’m relieved, more than anything else,’ said Rams boss Workman. ‘Chudleigh gave us a really tough game like we expected them to, there were a lot of walking wounded out there for both teams.

‘I’m just so proud of these boys. They’ve done absolutely everything that I’ve asked of them. I’ve actually named them the “quad squad”, so that will stay with them now!

‘This tops everything for me. My whole family have been involved with the club for a long time so it means a hell of a lot. I am extraordinarily proud.’

Kingsteignton are the first team to complete a South Devon League quadruple since Watcombe Wanderers in 2013/14.