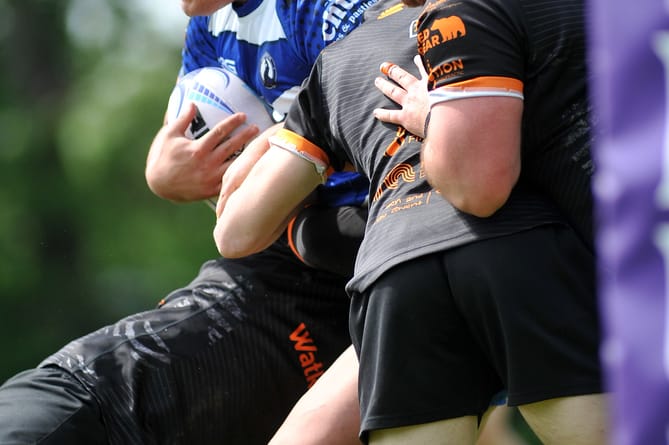 Action from the season-opening clash between Devon Sharks and Torfaen Tigers on Saturday.

DEVON Sharks welcomed Welsh-based Torfaen Tigers to Rackerhayes on Saturday in their opening game of the Southern Conference League.

With both teams having a delayed start they were eager to take the first points on offer.

Before kick-off the Sharks held the 13 jersey aloft and conducted a minute’s applause in memory of player Ben Spear, after his sudden and unexpected death earlier in the year.

The Sharks got off to the best of starts with the first of three tries for Wes Keywood in the afternoon, which he converted to make it 6-0.

The Tigers quickly settled, though, and powered through the Sharks’ defence several times, taking the lead to 6-22.

It looked like the Sharks could get back into the game with some slick passing and Keywood crossing the line for his second, making the score 12-22. But Tigers again dominated the game, taking the score to 12-32 at half-time.

A difficult team talk at the break from head coach Ryan Chivers to try and keep the team going was quickly ended at the start of the second half with them crossing the line sooner after the restart.

Keywood scored his third and final try of the day and converted the points, but the Tigers’ dominance of the game from start to finish just proved too much. Final score 18-64.