TEIGN TO CHIEF: Norey the latest Bitton Park graduate to burst onto scene 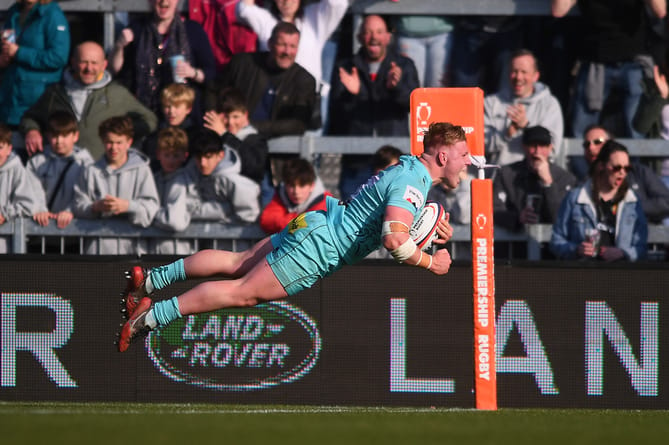 ANOTHER product of the Teignmouth RFC youth set-up burst onto the scene playing for the Exeter Chiefs last weekend.

Hooker Max Norey stepped and barged his way over for a try hat-trick in Saturday’s 31-29 victory over Worcester Warriors in the Premiership Rugby Cup.

It was the 22-year-old’s first start for the Sandy Park club, having bagged his maiden senior try off the bench during the previous week’s defeat against the same opposition.

‘It was good,’ Norey told the Mid-Devon Advertiser this week. ‘I was nervous in certain areas and the scrum was probably my biggest focus, but it went well.

‘We went into it with a good mindset and got the result we wanted as well, which is good. Personally I didn’t want to put too much pressure on myself, just go out there and show what I can do.

‘For the first try, the hooker is allocated the carrier role at a tap-and-go penalty – and it’s a daunting place to be when you’re stood looking at a load of big blokes in front of you.

‘I back myself on being a little bit quicker and a little bit more nimble and I managed to stretch out and get the ball over.

‘The second one was funny because myself and Stu [Townsend, scrum-half] were having a bit of a back-and-forth with it. He wanted the ball and I kept telling him to wait.

‘As I picked from the maul he was actually trying to grab the ball, and luckily I’ve managed to keep hold of it strongly enough and break through.

‘Then the third one was a bit of a walk-in. Overall I can’t have really asked for a much better result, personally.’

Having played football during his younger years, Norey first swapped a round ball for an egg-shaped one during his early teens.

He would progress through the age groups at Bitton Park right up to colts rugby, before going to study and play rugby at Ivybridge College.

‘I started rugby in the first season of playing on big pitches, which would’ve been either under-13s or under-14s,’ Norey recalled.

‘[Coach] Mark Annal used to chuck me in at prop and I used to run around and do my thing. I used to love it, and it definitely helped just getting out and being with my mates.

‘It’s where I really grew my love for the sport and it has all developed from there for me. It gave me the opportunity to be seen by county coaches and the like.

‘It’s definitely where it all starts so I can’t recommend club rugby enough. You make friends for life and always bump back into old mates.

‘When you pop back down to Teignmouth Rugby Club there’s lots of support down there. It’s always good to chat with a few old faces.

‘With all the messages you get before and after games, and knowing that people here are watching, it does probably make you play that one or two per cent harder. It is good to have the backing of a lovely place like this.’

Norey’s love for the place where it all started is definitely reciprocated by his home club, who now have another export to keep an eye on.

‘He’s well and truly taking his opportunity. Hooker is a tough position to break into at Chiefs, too – with the likes of Luke Cowan-Dickie, Jack Yeandle and Jack Innard there too.

‘I’m pleased as punch for him. Much like Sam [Simmonds] and Joe [Simmonds], when he doesn’t have a game he always comes town to support the club.

► For the full interview, pick up a copy of today’s Mid-Devon Advertiser, Teignmouth Post or Dawlish Gazette (24.03.22).