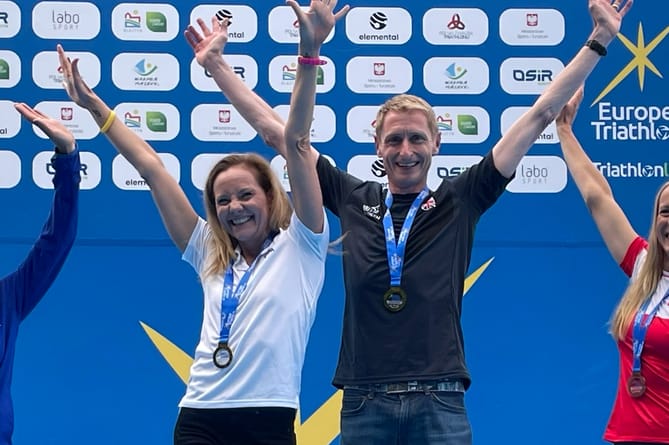 A TEIGNBRIDGE triathlete has more reason to celebrate after successfully defending his European title.

Sunday, May 29 saw 179 British Age Group triathletes, alongside their European counterparts, battle the Olympic distance course (1.5km swim, 40km bike and 10km run) all in the hope of collecting an elusive European title.

With a total field of approximately 380 competitors, the swim took place in a lake on the outskirts of the city.

Katya’s on the silk road from Ukraine to gymnastics glory

This was followed by a hilly and windy bike course, which took the athletes out of the city on a three-lap circuit.

A fast and flat run course around the lake and transition area completed the course with athletes finishing under the gantry on the famous blue carpet.

Like the UK, Poland was experiencing some unsettled weather and the temperature was only around 12 degrees with heavy rain showers on race day.

On race morning the heavens opened which made setting up transition unpleasant and the bike course was wet with large puddles forming.

Starting in age grouped waves, Donald started in wave 10 with the rest of the 45-49 men. He showed his strength in the swim, exiting the water first in the wave and onto the bike which had challenging conditions.

Three laps of a 14km circuit, which had a few dead turns and a steady climb to do twice per lap which Donald – a Teignmouth native – took cautiously, and successfully made it around the bike course finishing with the fastest bike time of the day from all age groups.

He continued to extend his lead throughout the run to finish in a time of 1:57:53, exactly nine minutes ahead of second place within his age group.

This also gave him the fastest overall time of the race across all age groups by a margin of 41 seconds.

Already the European champion from 2021, Donald retained his title to add to his British Championship Duathlon win at Oulton Park in April.

Donald has a busy season ahead. He is currently preparing for the British Champions in Leeds in June, followed by the European Championships for Sprint distance Triathlon in Munich in August, culminating in the World Championships taking place in Abu Dhabi in November.