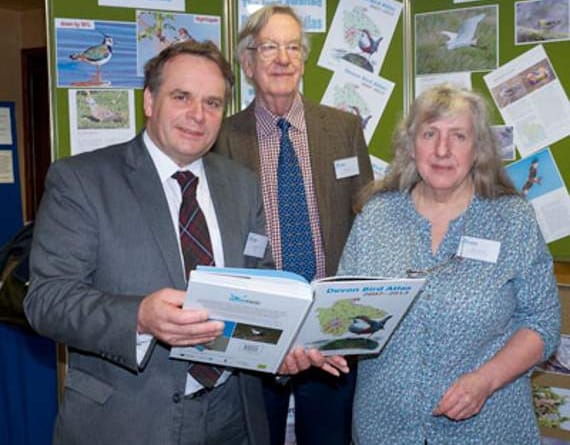 BIRDS AND WORDS: Left to right at the launch are Neil Parish MP; Dr Mike Lock and Stella Beavan, coeditors of the book.

AN atlas of Devon’s birds – the result of eight years’ work by its coeditors – has been launched in Teignbridge.

The Devon Bird Atlas 2016, published by Devon Birds, the county’s conservation charity, is only the second published work mapping the county’s breeding birds and the first to map wintering species.

A team from the charity headed by coeditors Stella Bevan and Mike Lock collated accounts of 380 species from 1,100,000 records collected by more than 1,200 birdwatchers.

Among its revelations is the fact that the lapwing, once widespread in the county, now breeds only on southern Dartmoor and on the RSPB reserves on the Exe estuary.

Among those at the launch was Neil Parish, the MP for Tiverton and Honiton, who is chairman of the government’s environment, food and rural affairs committee.

Last week, the chairman of Devon Birds, George Harris – who gave a welcoming address at Friday’s launch – described the publication as ‘the Domesday Book for birds in the county’.

He stressed: ‘We now have the evidence to tell us just how our birds are faring and the news is not encouraging for many species. I hope this is the wake-up call we need...’

Copies of the £40 book were presented to Mr Parish; to County Cllr Christine Channon, chairman of Devon County Council; to Tom Stratton, deputy land steward of the duchy; and to Nik Ward, a senior ecologist for Natural England.